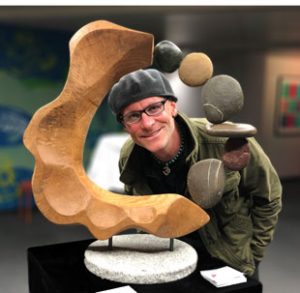 In early 2015, Muk received the (self-) diagnosis Temporis Profusio. Before that, his life was almost normal: school – very long. At 22 years father. Studying tourism. At 25 again father. Career. House owner, car owner, the whole crazy consumerism. At age 38, the family idyll breaks up. Becomes grandfather at 41. In 2013 he started with his first wooden sculptures. He likes the number 72.

In autumn 2015, the previously analyzed symptoms (waste of time) became so strong that a drop out of ‘normal’ occurred. Whereby: Muk doesn’t like the word dropout. He is in full swing, that’s why he calls it better changeover. A few months followed as a vagabond while he expolred meditating, discussing, experimenting and spiritually inspired his heart’s true desires. These include: creating (wooden) sculptures, bringing light to the world (lamps) and designing beautiful things.

Muk originally wanted to become an inventor, but eventually realized that actually everything was already invented; at least the things he wanted to invent. The experimental spirit was nevertheless preserved, so he often tries different materials, in an unusual use or combines them. His deliberately chosen approach is unbounded by clear ideas. Beauty needs space. That’s why his objects are mainly created in a flow process in order to give space to the unexpected. By the way: Muk believes that he does not determine the final form, but his materials tell him in an intensive conversation, what they want to look like.

This informal creative approach most likely has something to do with his name Muk, which he has been using since kindergarten. In his wandering years he discovered that it had a connection to the Sankskrit words ‘mukti’ or ‘mukta’. They mean liberation, redemption, freedom or the liberated.

creado is a two-part word creation consisting of crea and do. The first syllable crea relates to the English word creative. The final syllable do is based on a word in Japanese, known for example in Budo, Judo or Aikido. A traditional term that means path and includes the practice and design of a path. In this sense, creado means treading a creative path.